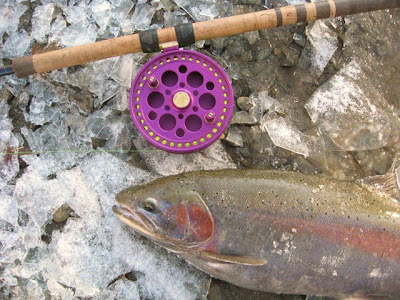 I want to kick Dick Godard in the balls. Dick is Fox channel 8 weather dinosaur and basically made my weekend miserable in regards to the weather. With the crappy conditions I had to contend with last weekend, I was looking forward to making up for that debacle. Fortunately, the fishing gods took pity on me and blessed me with some fish. Earlier in the week the weather outlook for the upcoming weekend was calling for a chilly Saturday morning followed by temps in the upper 30s with bright skies. For Sunday, there was a 30% chance of rain. But, but and that's a big but, because every angler knows how accurate the weather reporting can be. 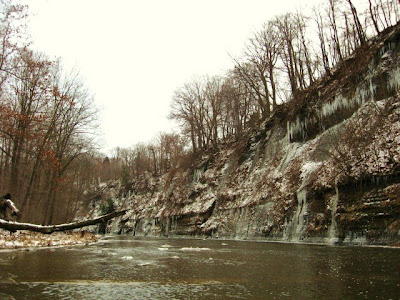 Saturday morning, I drove east only to see the river clogged with slush. It wasn't those small annoying blobs, it was more like those blobs that could devour a steelheader. I rolled the dice as I knew the night time temps were to be in the 20s, but I figured the river would be slush free due to the blowout and warmer temps earlier in the week. With the sun, I thought the slush would burn off by noon, wrong. I made the best of a bad situation and tried fish through it. I re-rigged with my slush buster set-up. I stacked all of my shots low and I had to drop shot it between chunks. The shots would enable me to get everything down quick before a blob devoured my float. I managed to catch some nice size fish including one large male that ripped through several slush chunks with relative ease. The temperature barely made it out of the 20s and the wind made it felt even colder. I looked at the time and it was almost 12:00P.M. It was time for plan B and headed to another river even though I knew it was higher and off color. I arrived to see there was no slush, but the water was dirty. By now it was almost 1:00P.M and it still felt cold. I figured there was no way the slush would burn off. The fishing sucked and I decided to give it a try again tomorrow. On the way home, I listened to radio and the temperature was 29F and this was 2:00P.M. Later I found out the slush in fact did burn off around 2:00P.M and the fish turned on.........d'oh. 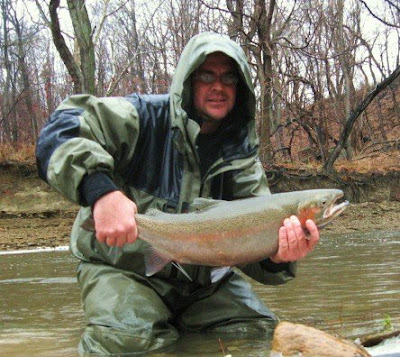 We all know that the weather man can screw up the forecast. It's pretty a given nearly every week during the season when he's calls for rain only to find out that nothing happens. Or there's the case of calling no rain, only to get soaked because I left my jacket at home. After a while I've come to the conclusion, that most of the time even he doesn't have a clue what's going to happen with the weather. 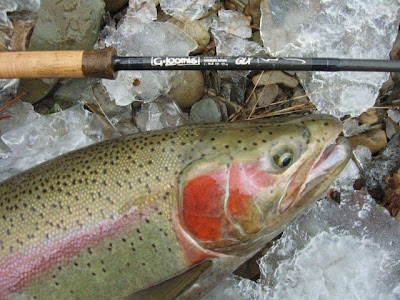 While it's a minor inconvenience for me, imagine the guys having to make a two or three hour drive. They have no idea what's going to happen and I've run into guys on the river that showed only to see it clogged with slush or blow out before noon. I often hear the

"But, but, but the weatherman said it wasn't suppose to rain?"

Now they're looking at a stream that's turning to shit and to make things worse, they'll drive back with a skunk around their necks.
Posted by Greg at 6:19 PM