Once in while we catch a fish that is really fucked up looking. Something that looks like it came from Chernobyl. They defy the notion survival of the fittest. Whatever the case, there were times I was debating whether to put them out of their misery. Here's the motley collection

This fish above looked like it swallowed a softball. I was tempted to club it over the head, but instead I released it. I watched it float off downstream and eventually sink into the abyss. 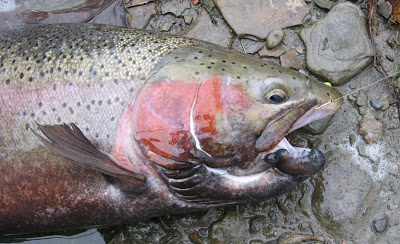 This fish was actually fat and healthy looking despite the fact it's bottom jaw was deformed. I remember my younger brother having his jaw reconstructed and being on a liquid diet for six weeks. Remarkable that fish could eat. 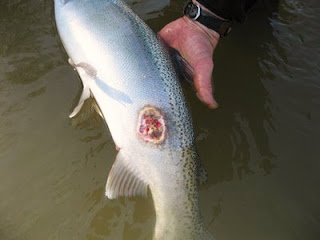 Every year I catch a few fish sporting some gnarly lamprey wounds or scars. 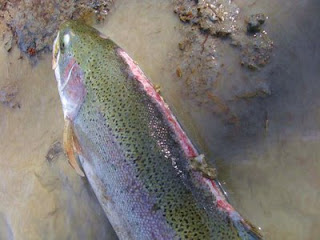 Caught this fish after ice out. Steelhead can be vulnerable to getting injured or even killed by chunks of ice because most of streams along Steelhead Alley are very shallow. The wound pattern shows a narrow long cut the length of the back and it was caused by a sharp piece of ice. Released it and it took off like a champ. 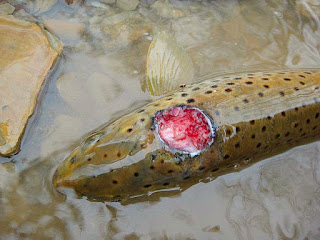 This little brown trout had what looks like a recent lamprey wound.

It just shows you how tough these fish really are.
Posted by Greg at 6:11 PM

Wow..
You win!
lol
That second fish looks like Morin.

I hit the comment button frantically type "That second fish looks like Norland"! and the F*cker...Beat me to the press.
Kinda make me wonder if you didn't have a pink reel ya just may catch some purty fishies ;0)

Ugly fish are cool. Maybe I can start a who can post the gayest looking fish........