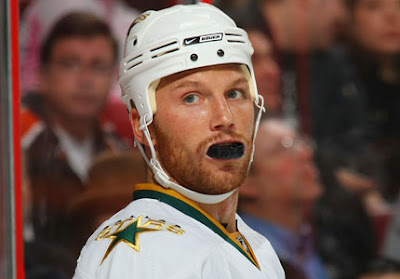 The biggest shit disturber, asshole, scumbag and punk Sean Avery got sent to the principal's office for saying bad things about his former puck bunny Elisha Cuthbert. It all started when the Star's pest made the comment

"I am really happy to be back in Calgary, I love Canada. I just want to comment on how it's become like a common thing in the NHL for guys to fall in love with my sloppy seconds. I don't know what that's about. Enjoy the game tonight."

Avery was punished indefinitely by commissioner Gary Bettman for the crude comments and kept him from playing against the Flames and for good reason as Flames defenseman Dion Phaneuf is currently dating Cuthbert. Instead of suspending him, Bettman should have thrown him out on the ice and let him and Phaneuf settle it with a good ole fashion NHL scrap.

I think the whole thing is blown out of proportion. Trash talking is a part of sports and there's some guys that are masters at it. Avery will always be an asshole because that's what keeps him employed. There's always been a place for players like Avery in the NHL, the guy that gets under your skin, throws you off your game and relishes that role. But you have to wonder if the Stars regret signing him, because he a history of questionable behavoir on and off the ice.

Back to the river.