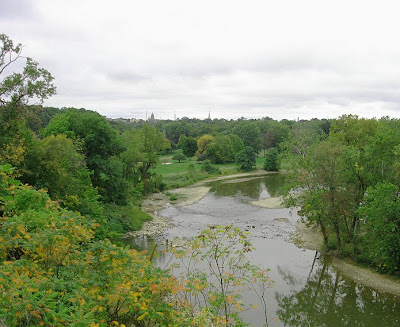 Shaping up to be another dry fall here in Steelhead Alley. It's been a couple of weeks since we last had any sufficient rainfall to get the rivers high and push in the first run of the new season. The rivers are extremely low and in most spots the flow is virtually non-existent. There are some fish that have trickled in, but in small numbers. The anglers tossing hardware have had the most success as the majority of fish have retreated into frog water.

During this time of year, I often use these outings for scouting. Most of Ohio's streams often change due to it's flash flood nature and erosion of shale cliffs and clay banks. Nearly every year, I find one of my favorite holes or pools filled in or its course altered. I usually have to make mental notes on depth and structures. Gravel in one section gets washed away and ends up in another spot, bridge construction alters the flow and creates a deeper run or several large trees fall into the river and create a break in the current. Keeping up with all of the changes can be a daunting task.

Today was more or less a scouting trip and if I got some fish, lucky me. The water was extremely low and much more clearer than last week. I managed to catch a couple of fresh fish on King salmon eggs I recently got late last week. The fish came from a run that runs much deeper during the winter. The eggs were so good I caught several smallmouth bass on them.

The weather forecast for the upcoming week is calling for a chance of rain, but it's a small chance. A couple hours of light rain isn't going to effect the rivers much. We need a major soaker or a week's worth of it to replenish the water table and keep the levels high for several days to get some fish in. Temperature wise, it's going to get colder and will bring in more fish near the mouths. If your traveling a far distance, forgot about it........

Let the rain dance begin.
We have got good flows here and things are looking sweet.
I will step on a few spiders for you.
Good luck this year.
Gene