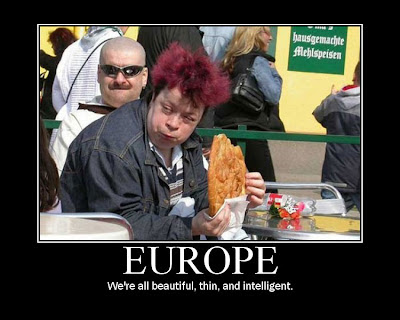 Leave it to the Swiss of all people to pass this incredibly stupid piece of legislation. I expect this shit from the French.

Under new legislation outlined by the Bundesrat - the Swiss Federal Parliament - catch and release fishing will be banned in Switzerland beginning next year. It was also revealed this week that Swiss anglers will have to demonstrate their expertise by taking a course on humane methods of catching fish.

The new legislation states that fish caught should be killed immediately following their capture, with a sharp blow to the head from a blunt instrument. Under the new regulations, the use of live bait and barbed hooks is also prohibited except in certain situations.

The laws are scheduled to come into effect in 2009. While the Swiss government does not mention catch and release specifically, it does say that "it is not permitted to go fishing with the 'intention' to release the fish."

EFTTA (European Fishing Tackle Trade Association) lobbyist Jan Kappel has been in contact with Martin Peter, Vice President of the Swiss Angling Federation, to see whether a joint approach to the Swiss government could persuade them to amend the legislation - which forms part of a much wider animal welfare program. The law on the protection of animals was passed by the Swiss parliament in 2005 and officials have spent three years refining the details, taking into account the comments of interested parties.

Said Jan, "Catch and release is one of the most difficult issues we have to deal with, and one of the most important in my opinion. The new Swiss law doesn't make use of the term, catch and release, – but I don't see how governments can enforce legislation which makes 'intent' illegal. And demanding that people kill the fish they catch gives no thought to the conservation benefits from releasing them. Angling Codes of Conduct with regards to proper handling and releases can be found for practically any fish species caught by anglers in Switzerland and the rest of the world. The new Swiss law makes it obligatory for anglers to take lessons before being granted a fishing license. So there is absolutely no need for an outright ban on the release of fish in Switzerland.”

It’s believed that the legislation could affect as many as 275,000 anglers in Switzerland, who generate around 30 million Euros in annual tackle sales. EFTTA acting president, Pierangelo Zanetta, said: "EFTTA does not believe that forcing anglers to kill their catches is either good for nature or for recreational sport fishing - which makes a significant financial contribution to the EU economy. Making the killing of fish obligatory will simply reduce fish population and, at the same time, run the risk of having a negative impact on sport fishing. Anglers and the sport of angling invest time and money to improve water quality and create larger and healthier fish populations. We believe is it far better for the fish if the fisherman decides, according to the situation, whether to keep and eat the fish or to release it."

This is a perfect example when you let a bunch of idiots draft up and pass a law. I guess after being hooked is far too traumatic for a fish to survive after it's released. Where did they get their information I wonder? Catch and release is one of the best methods of conservation and maintaining a healthy fishery. I was taught at a young age the old saying " Limit your catch but catch your limit" If Swiss anglers don't practice catch and release, they'll see first hand the destruction they'll cause. As more and more fish are caught, it create more and more time that a angler has to fish. Many anglers will grow frustrated and eventually stop fishing. Less anglers means less revenue from licenses, lodging, and purchasing tackle. I find it laughable that they spent three years working on this and this the best they could come with - unbelievable. This would never happen in North America - trust me.
Posted by Greg at 3:43 PM