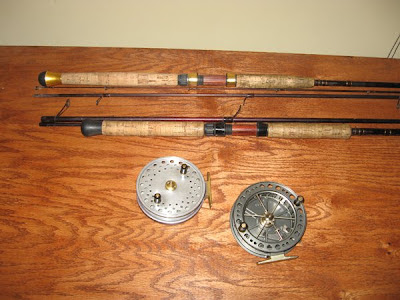 Been spending the wee hours searching online for new fishing gear. After I officially end the season, my Simms waders and Chota boots got tossed to the curb. I have a long list as I need waders, boots, tools and a jacket. I've also been looking at adding another reel. I've been researching on what's the best fit for me. I've been on Cabelas, LL Bean, Orvis and Ebay looking for deals.


Buying fishing equipment is one thing, but trying to sell it is another. Over the past couple of weeks, I placed several ads on various float fishing sites. I placed two items - my Milner reel and Raven rod. I've had several bites, but nobody took the bait. I had one person interested in the reel, but when I asked for a money order, he balked. He stated that he didn't want to get burned? I replied "how were you expecting to pay for it?" Of course I got no response, fucktard. I've thinking of selling my Bob James and I know it will sell fast on Ebay as British anglers would jump at the chance of buying one considering the pound is worth two dollars.


With a shitty economy and people using their tax rebates to fill up the pickup, money is tight. I'll give it and couple more weeks. At my rate, I'll a room full of old fishing equipment in the not distance future.
Posted by Greg at 9:15 PM

Hi Greg..
I did some spring cleaning last year myself and sold, among other things, two reels that were collecting dust.
I went the ebay route and was very glad I did.
I made out like a bandit!
One floatreel went to a dude in Maryland??
Good luck