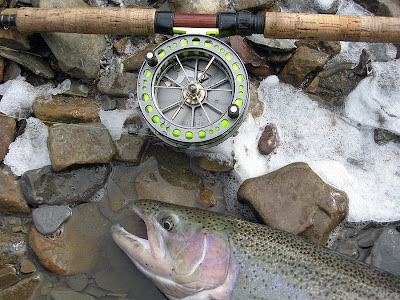 I was itching to get out and try my new Bob James reel that I purchased on Friday. The majority of streams in Ohio were still running high and dirty and knew of a place that would have fishable water. I left around 6:00A.M and picked up my cup of coffee and headed east for a day of good fishing. With gas prices at $3.30 a gallon, I kept the cruise control at 65mph. I arrived around 7:30A.M and the stream was slightly stained, but very fishable. Even though it was chilly, there was no slush to speak of. I hit my first spot - a large shallow pool about 3' deep. During the winter, this spot usually holds a lot of fish, but it does get pounded hard. On the menu was cured coho eggs tied in peach, red, pink and white. I only had one jar of eggs as I fell asleep on the couch last night and woke up around 10:00P.M and hastily tied some eggs before hitting the sack again.

I was like an eager little kid on Easter morning waiting to get high on all of the chocolate Easter eggs. I couldn't wait to break in my new reel. The Bob James is very different from my Kingfisher. It is much lighter and balanced well with my 13'6" Raven float rod. When it came to doing the Wallis cast, it performed flawlessly and that was the biggest factor when it came down to the Islander and Bob James. I tried an Islander and I found it spun too quickly and the spool was too deep. The grub screw was a nice feature as it allows me to add more tension to the reel and slow it down in faster water. The only drawbacks were the clicker, as I found it was set to high on the reel. Being right handed makes it worse and a couple of times, I accidentally engage the clicker. The handles are placed at the edge of the spool and with my Kingfisher I used to use my fingers as the drag as the handles on that reel were placed away from the spool's edge.

It didn't take long to pop Bob's cherry as I hooked into the first fish of the morning. I was mindful of the clicker and I used my palm as the drag, I landed a chrome male on a peach spawn sac. Nearly all of the fish caught today were bright and full of fight. Tailouts, along seams and pocket water were the ticket. As I walked along the river, I noticed several redds were dug with a couple of fish spawning.

On the way home, I stopped by the Grand and it was still running high and hard. I seriously doubt the Grand will even fish for the remainder of the month. The Chagrin was still running muddy and there is enough snow in the surrounding woods to keep water levels high for the rest of this week. Hopefully, everything will fall in place for my vacation week starting April 7th.
Posted by Greg at 7:15 PM