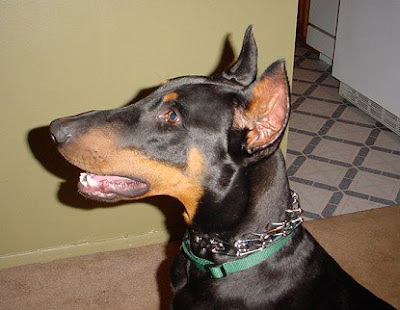 I recieve news yesterday that our dog Peyton had passed away. Peyton was our Doberman that we adopted when he was 6 months old from an animal shelter in West Virginia. My ex-wife took him to the vet after he was limping for several weeks. They found a cyst on his hind leg attached to the bone. They removed it and sent it out for a biopsy. After surgery he seemed fine, but then took a turn for the worse. She arrived at the vet's office to pick him up and the vet gave her the bad news that he died 15 minutes ago. The vet thinks a blood clot might of caused his death.

That evening, I recieved a call and my ex-wife was sobbing. I sat on the other end silent, but not surprised. For the past couple of years, Peyton was plagued with health problems - Addison's disease and Discoid lupus to name a few. I believe those ailments took a toll on his health and I've had suspicious feelings that he was from a puppy mill.

When my wife and I separated, he went with her as she worked from home. For a period of nearly a year, I didn't see him. When my ex was out of town on business, I took care of him for a week. At first he didn't know who I was, but he gradually felt more comfortable. Since my wife and I didn't have children, he was like our child. I affectionately called him my bossy brat.

Sorry to hear about your dog.
Mans best friend indeed. It is easy to get choked up thinking about dogs of the past.
Loyal to the death and always glad to see you....what more can you ask for.