Return of the Couch Potato 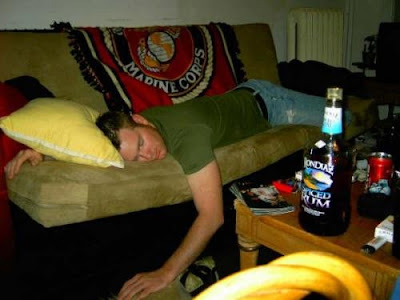 The Siberian Express was a little behind schedule this morning. Yesterday, I fished the Rock after work and did well considering I had an hour and a half to play with. The river was flowing strong enough that side ice wouldn't form. Slush on the other hand could be a problem in the morning. Wanted to get out before we would get major Mother Nature bitch slapping.

I woke around 8:00A.M and drove to the river. This was one of the rare times I've fished the Rocky on a weekend. I thought the colder weather and chance of slush would keep most of the people in bed. I guess there were a quite a few people looking to get out before the big freeze. I arrived at the first spot and there were a couple of guys fishing the faster water??? I slipped down into the flats and started looking for players. It was very slow as I didn't have any takers. I fished the same section yesterday and caught a nice collection of large bruising hens and frisky skippers. I fished for about an hour and moved to another spot.

The wind was as cold as witch's tittie and the rod's eyes kept icing up. The water on the other hand was perfect. I managed to hook in several large hens hanging in water 3' deep along the bank. But, the wind literally made my hands useless and on top of that, I lost my hemostats. I was able to get the hooks out but that was enough for me. I returned to the Jeep to defrost and chatted with a couple of friends in the lot.

Drove back down river to finish off the remaining eggs I had. There about 5 guys fishing, but they were landlocked and fishing the faster water??? I waded into the shallow water as my knees ached from the cold water. I had about 100 yards of water to play with. It was still slow and I caught a few here and there. It was 11:30A.M and my feet ached, the temperature was getting colder and I had my fill of fish.

As the streams drop and flow gets slower, the rivers will start to freeze over. It's a matter of time until all of the prime winter holding spots will be unfishable. This is part of Steelhead Alley fishing as cold snaps will shut down the fishery. Last year, we had the warmest January on record. Then February came and we had nine straight days of subzero temperatures. It locked everything up and the rivers didn't fish until Mid-March.

Keep the faith brother! We will get another kick at the cat yet.
I'm sure there is another warming trend in old mother nature! ;0)