A Nice Drive Through The Park 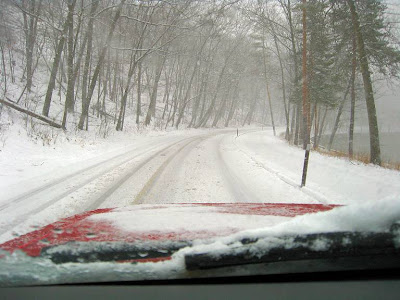 Came down with the ever popular 24 hour flu and called in sick. With all of the bullshit at work, I thought I would stick it too them. I stuck close to home and fished the urban sewer. Yesterday the river went up and gradually came down to large sacs level. The forecast was calling for lake effect snows and temps in the lower 30s. I wanted to get out before the Siberian Express arrived in town this weekend.


I had overly ripen uncured eggs in one container and it smelled liked the Browns locker room. In the murky conditions any scent would be an advantage. I hit the lower river and ran into Ken. Ken is an engineer, but your first impression is he looks like a landscaper collecting pogey and getting through the winter fishing. Ken still uses his old spinning reel and rod. His waders are stained from the years of egg goo and slime. But the guy can flat out fish. I yelled out to save some fish for us bums. We chatted for bit and he was debating whether to call in sick. The fishing was somewhat slow as I caught some fish here and there. Ken caught a couple more and decided to go to work.
There was a stiff wind from the west and it started to push water upstream. It was a neat sight watching the water move upstream like a tidal surge. At one point the waves got about a foot high. I was sure that this would affect the fish as the current made them move. I fished above the surge as I struggled to see my float. The bite turned off and I was getting cold. I sat in the Jeep and drank some coffee. Eventually the feeling in my feet came back.

I drove farther upstream and it started to snow hard. The parkway was covered and there were no cars. I arrived at a popular spot and walked through the squall. It was still snowing and I could barely see the float. The end result I missed a lot of takes and had fish spitting the hook. I probably lost at least 8 fish due to poor hook sets. By then my feet felt like ice blocks and it was late afternoon. Four hours later under the covers watching TV, my feet were still cold.

I'm hoping that the warmer temps start melting off the snow and blowing the rivers out. If that's the case, the rivers won't freeze over during over the weekend. Temps are to be in the teens and single digits overnight.
Posted by Greg at 9:36 PM