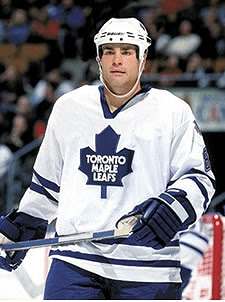 The Big “E” finally decided to hang up the skates and ended one the most disappointing careers in pro sports. He was in the spotlight through out his career and it mostly for the wrong reasons. I thought he was a very talented player in the mold of a Mark Messier. But, I gradually started to hate him as a hockey fan.


I remember seeing Lindros for the first time when the Oshawa Generals played in . He was a man playing amongst boys and everybody at the rink was watching the next NHL superstar. He had the complete package - size, soft hands, great vision and could beat the shit out of anybody. It was special witnessing a player on the ice that was so amazing, everybody stopped to watch when he touched the puck. He was so talented that even though wasn't drafted yet, he was invited and made it on the roster to represent Team Canada in the Canada Cup. He was a human wrecking ball and he helped Canada win another cup.
But, that changed during the 1991 draft. He started his career on the wrong foot when he basically gave the Nordiques the middle finger. Even though he publicly told the Nords that playing in Quebec City was out of the question, the Nords still selected him. He walked down with a smirk on his face. He stood on the stage and refused to put on the jersey. Eric did the same thing when the Soo Greyhounds drafted him. Both times, his parents – Carl and Bonnie were calling the shots. They were the stereotypical hockey parents – over bearing, selfish and meddling.

It turned into a stalemate and a year later, the Nords traded him to the Flyers for a boatload of players, picks and cash. That trade helped the Nords who after several years later moved to Denver and they won their first Stanley Cup. The Flyers on the other hand became a better team, but they could never get over the hump and bring home the hardware. That was first in a long line of controversies that dogged him through out his career- his lack of leadership, feuding with Flyer's GM - Bobbie Clark, his aloof personality and injuries.
Oh, those injuries and he racked them up. Due to his style of play, he was going to get injured from time to time. But, his Achilles heel was the concussions and some of them were brutal. The one that ended his career was the one that Scott Stevens laid on him. He was never the same after that. The Rangers rolled the dice and traded for him. He had one good year and after that he started to decline.
As usual, hockey players from at the end of their careers always dreamed of playing for the Leafs. The problem is the Leafs are willing to sign them. In return the team generally gets nothing out of them. When the Leafs signed him, he was 32 years old and by then, he was washed up. The Leafs had money to burn and figured a million per year was a bargain. He lasted only 33 games and scored 22 points. That was the end of Eric Lindros in Toronto. He signed with the Stars for one year and had another injury plagued season. After the season was over, he officially retired at the age of 34.

Does he belong in the hall of fame? He’s borderline. He does have great stats – 372 goals, 493 assists for 865 points in 760 games. But one Hart trophy isn’t enough. He didn’t win a scoring title, didn’t score 50 goals, didn’t win a cup, was a poor leader and injuries cut his career short. But, if Cam Neely got in, that's an argument in Lindro's favor.
Posted by Greg at 8:56 PM