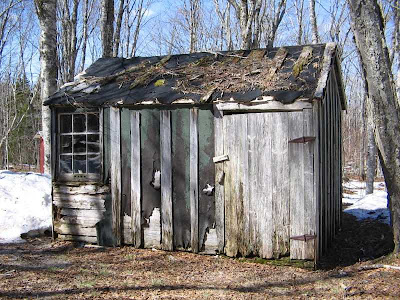 Eight months ago, my wife and I decided to separate after 9 years of marriage. Like most of today’s couples, we accumulated a lot of debt. Luckily, we ended the relationship on a civil note and the neighbors were relieved that the house wouldn't be burned down. She left to stay with a friend and I stayed in the house for the time being. To pay off the debt we needed to sell the house. Unfortunately, we couldn't time it at a worse time. The housing market here in the states has hit rock bottom.


I have the dubious distinction of living in aka Crapahoga County. The county has the highest rate of foreclosure in the state of . The big three – , and Indiana have the highest rates of foreclosures nation wide. Ironically, it’s the big 3 – GM, Ford and Chrysler that have caused problems in those states as plants are slated to close and people being laid off. Several plants here in the area have been either idled or slated to close. Even before the downturn in the auto industry, Cleveland has struggled as it still relies on manufacturing.

This year, the county is on track for 17,000 foreclosures, that’s 1 house for every 77 houses in the county! The county treasurers office can't keep up with the amount of people foreclosing or not paying their property taxes. Even the burbs are not immune. The final nail in the coffin for these doomed homeowners were the sub-prime loans. A lot of naive first time owners got suckered into owning the American Dream by morally corrupt brokers looking to get rich quick. The fine print in these loan documents would make a lawyer’s head spin. Now many of these homeowners are screwed as the interest rates started going up. Many people’s mortgages have doubled and they can't pay. Most of them end up walking away. It’s common to drive through some of the inner ring communities such as , and and see houses boarded up. Last week, I was in and there were 12 houses for sale on one street. It’s a truly depressing sight when you see for sale signs littering front lawns on certain streets. As these foreclosed properties glut the already saturated market, it leaves me screwed as I’m competing with a ton of properties.
In June, I hired a realtor. One of my co-workers said she was a great. I called her up to set up an appointment. I thought she a nice lady and she had a great reputation. She walked around the house and gave me some pointers. After 2 phone calls, she dropped off the face of the earth. I was puzzled as why she decided to jump ship. I guess the thought of losing out on selling houses in the tony communities of Avon Lake, Bay Village and Westlake was too much for her to bear. I wasn’t happy as I wasted almost an entire month.

I decided to call our realtor who helped us buy our home almost five years ago. Michelle stopped by the house and gave her condolences. We sat down and devised a game plan. I lived in the community of , which was considered to be one of ’s blue collar middle class suburbs. The city was rated as one the best bargains in this year’s magazine for buying a house. Most of the homes are affordable and popular with first time buyers. Five years ago we bought the house for $146,500. It was a 3 bedroom split level built back in the early 1960s. Michelle told me that we should list the 4 car garage as the major selling point. The property also had a large backyard. But, when I asked Michelle what were the chances of selling quick, she told me it was a buyers market and a lot of the buyers are picky.
Michelle said we should list the house for $155,000; I paid $146,500 almost 5 years ago. I would be grateful if I broke even. The other problem Michelle told me was just over in , a person can buy a relatively new house for the same price and the property taxes are much less. I tried to put on a brave face and hoped that some grease monkey was looking for a 4 car garage. But, I had to accept the possibility that I could be living in the house for a long time. Like with any down market, there are no guarantees. I’ve had all sorts of advice – my dad basically said “Screw her, move back to Canada”, my father-in-law told me to short sell it when times get tough, and my neighbor told me that we should get back together and tough it out. There was no way that I could walk away and ruin my credit rating. Recently I found out that my wife was fired from her job at the university. Since she was self employed and a disaster at money management, there was no way that we would last a week together.

Will the house sell for $155,000? Who knows. Last year, any Joe Lunchbox could get a mortgage with nothing down and have bad credit. Today, the nothing down mortgage is gone. Also gone are the fly by night brokers. Many of the banks in the area have tighten their belts. Hopefully at the end of the month, people will be getting back from vacation and beginning to look for a house. I hope they do, because if I don't sell it by winter. I'll literally be living in a van down by the river.......